Update - I originally wrote this back in 2008.  I am still wearing the watch, and still have not needed to set the time or replace the battery.

I did have to take it to a jeweler to re-attach the band after it was struck by a falling tree branch and popped off.  I was wearing the watch at the time, and fortunately neither I nor the timepiece were injured. From the picture, you can see that it is holding up pretty well.  There are some scratches on the crystal, but nothing very bad.  The black enamel in the letters on the bezel have worn away in the N, S, and W positions. The silver coating on the plastic case has worn away on some of the high spots, but it is nowhere near as bad as it was on the FT-200. (mostly because of the protection provided by the steel bezel)


Helpful Hint -- before shelling out for a watch, or any piece of technology for that matter, it is always a good idea to download and read the owners manual. Casio's watch manuals are available in PDF form on their watch support page. The manuals are organized by "Module" (movement) number, as the same movement is often used in several watch models (with different cases, bands, etc.). The FT200 uses module 1879, and the FTW100D-7V uses module 2628.

The Casio FT-200
My last watch was a Casio FT-200 that I received as a gift around 1998. I had been lusting for a G-Shock (to replace the DW5200 that I had worn in high school and college) at the time, but I was quickly won over by the geeky astronomical features of the FT-200. It also didn't look like I was wearing a brick on my wrist - which I think is what she-who-gave-it-to-me liked about it. I didn't start to get watch envy again until Casio came out with the Solar Atomic G-Shocks a few years later. 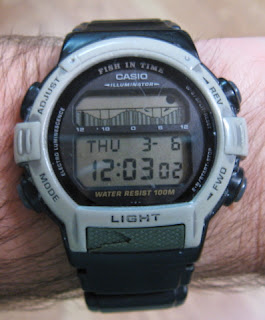 Here is my FT-200 after nearly a decade on my wrist. It still works, although it is showing its age. Here is a link to a nice shiny new FT-200 (in Brazil) for comparison.

I went through several bands and batteries during the time I have had this watch. The resin band has always been the first thing to go on the watches I've had - even on the supposedly indestructible G-shock. Sunshine and oxygen just attack the plastic until it gets brittle and deteriorates. The watch takes a standard CR2016 battery, and is easy to replace by removing the 4 small screws that hold the stainless-steel back onto the body of the watch. Batteries typically lasted a little less than 2 years, although I didn't keep any detailed records.

The crystal has only minor scratches on it, as it was protected by the raised bezel area around the face of the watch. That area is polished smooth from years of wear, and the original silver finish has given way to the greyish-beige plastic underneath. IIRC, the silver finish wore away rather quickly in all the high spots. The "Forester" logo at twelve o'clock has been worn away completely. Fortunately, the button labels were better protected, and are still legible.

The most recent battle scar on this watch is a literal one. The light button took a direct hit during a paintball game, and cracked. The button still functions, although it is not as easy to press, and the waterproofing has held up while doing dishes and showering since then.

Astronomical Features
The most obvious "special" feature on the FT-200 is the moon phase indicator, and (up to four) fish-shaped icons on the watch face. The fish icons correlate to times of increased fish and wildlife activity according to Solunar Tables. Personally, I found that the times I go fishing or hunting are determined by my work schedule, and/or the local game laws. Trying to schedule around the sun and moon just complicated things for me.

I did use the moon phase indicator, however. Knowing the moon phase helps one figure out if the night will be pitch dark (new moon) well-lit (full moon), or somewhere in between before planning an outdoor activity at night. The moon phase is also useful information for the diehard NetHack player.

My favorite special feature of the FT-200, and the one I was least willing to give up in a watch upgrade, is sunrise/sunset time. Having solunar table information on my wrist was only marginally useful, but knowing when I needed to wake up in order to get in the woods before sunup (or how much longer I had until dark) was very handy indeed.

The FT-200 can calculate solunar data, moon phase, and sunrise/sunset time for arbitrary dates. Current Casio watches with all these features include the PAS400 and the AMW700 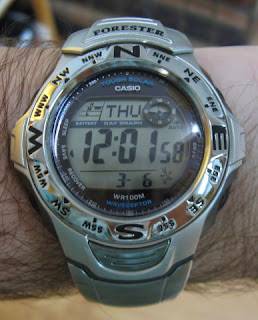 Dealing with the band
The folks at XCelwatches were quick. I ordered the new watch on a Thursday, and it arrived on the following Monday. The only thing standing between me and near-instant gratification was the stainless-steel band. The band was too large for my scrawny little wrists. I wound up paying a jeweler to remove 4 links from it when none of the blunt instruments I had at my disposal proved worthy of the job. If I had known I would need one, I would have bought a watch band tool and done the job myself.

The links on the stainless steel band are held together by tapered pins, and those pins are held in place by tiny rings (which would otherwise be called "roll pins" except that they are short, and meant to go around the outside of an even narrower solid pin). The links are marked with a small arrow, which shows the proper direction for knocking the tapered pins out.

Don't lose those tiny rings! (or "roll pins") The tapered pins will not stay in place without them, as the lady at the jewelry store found out when the watch band spontaneusly disassembled as she was placing it on my wrist.

It has been ages since I last had a watch with a steel band, and I wasn't sure I would like it. It turns out that I do like it. Despite the fact that it makes the watch heavier, it looks very good and should last longer than the rubber/resin bands I was used to.


Features
The FTW100D-7V occupies a unique niche in Casio's current lineup. Casio only makes a handful of "Forester" models, as opposed to a wide variety of G-Shock variants. The FTW100D-7V is the only Solar/Atomic watch I could find that had Sunrise/Sunset time, without stepping up to the more expensive Pathfinder series. It is the lowest price Solar/Atomic Casio watch that I could find. (at the time of this writing, the Solar/Atomic G-Shocks seem to start in the $80 range).

In addition to the sun-powered/self-setting goodness, the watch has 5 alarms (one of which has a "snooze button"), World Time (which I set to GMT for convenience in deciphering log files), a Time Recording feature that allows me to "timestamp" up to 30 events, a stopwatch (of course) and a "Bearing" mode.

Getting your bearings That "Bearing" mode requires some explanation. Some advertisements even call it a "Bearing sensor" -- but this watch does not have a digital compass. It is more like the Boy Scout trick of finding North with an analog watch. "Bearing mode" calculates the position of the sun relative to true north. Read the number from the face of the watch, then line up the (tiny and difficult to read) degree markings around the face of the watch. The big "N" on the non-moveable steel bezel will then be pointing toward true (not magnetic) North.

This is clever, but probably the least-likely-to-be-useful feature on this watch. If the nice folks at Casio really wanted to add a feature that didn't require any extra LCD screen elements, they should have added a countdown timer.

The Watch that takes care of itself
Working around NTP-synchronized computers has spoiled me. Likewise with the new "Atomic" alarm clocks that have replaced all the clocks in my house. I now expect clocks and computers to tell me what time it is, and not the other way around. The old FT-200 was rated to be accurate to +/- 20 seconds per month, which was very good in the days when setting my watch involved calling 555-1212 and listening for "At the tone, the time will be..." . But +20 seconds per month (my old watch was consistently fast) meant noticing that my watch was out of sync, and re-setting it every 2 weeks or so.

The FTW100 automatically sets itself every night, and the time on my watch now matches the time on my clocks, computers and routers - period. Here in Mississippi, if I try to do a "manual sync" during the daytime, it usually fails -- but the watch has consistently synchronized itself to WWVB every night since I received it.

Sunlight is abundant in Mississippi, too. After I initially charged the watch by setting it in the sun for a few hours, the battery indicator has not gone below "high" during weeks of normal use. It might be too early to tell, but I'm looking forward to going a long time before I have to change the battery.